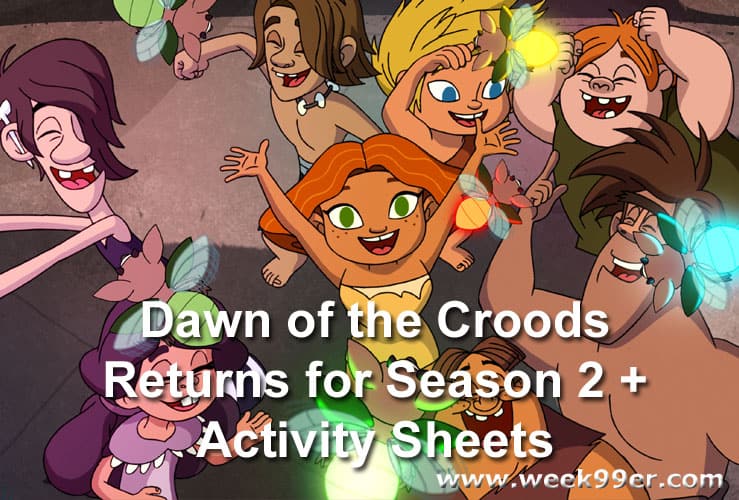 We’re so excited one of our favorite shows on Netflix is coming back for it’s second season. Actually, it’s second season premiered today! Long before the Croods met Guy and had the adventure of their lives running from the stone age to a modern life, life as cave people was hard but they had a good time. Dawn of the Croods gives you a look at their lives before the movie began.

Now in its second season, Dawn of the Croods are dealing with problems in their own Croodacious Era! Check out a description of the new season, a clip from the show and even printable activity sheets so you can have more Crood family fun!

About Dawn of the Croods:

The world’s first family returns for an all-new hilarious Season 2 of DREAMWORKS: DAWN OF THE CROODS!

Watch as Eep, Thunk, Grug, Ugga, Sandy and Gran encounter many new modern-day problems for the first time in history as they navigate life in the prehistoric Croodacious Era! Eep joins the first Scream-Leading team, sets up the first underground dance club, and takes up death-guarding at the watering hole; Grug tries to improve his hunting skills through the introduction of math and convinces the family to go on the first vacation; Thunk invents ventriloquism for the first-ever stand-up comedy show and tries the new fad, Slateboarding, with Eep.

Join the family as they meet new friends and encounter new creatures throughout Ahhh! Valley. Eep gets struck with the crush curse when a new cute guy, Kevin, comes to town; Thunk proves he’s responsible by babysitting the new, troublesome baby neighbor, Cliff; Grug finds a new friend, Gurg, to be his doppelganger when he wants to play hooky from his chores; and while on vacation, the whole family is attacked by a never-before-seen Tyrannoconda and meets a new family, The Broods, who live in a solitary utopia that seems too good to be true…

All of these new hilarious action-packed adventures and much more! Tune-in for more laughs only on Netflix August 26th!

“The Crush” – Eep sets her eyes on a cute, new guy named Kevin. The nervousness & butterflies in her stomach brings out the worst in her. Find out how she manages these emotions in an all-new season!