The methods of animation have changed slightly over the years, but the passion for it hasn’t. Inspired by the Jungle Book as a child, animator Mattias Lechner was the Art Director of Environments on the new Zootopia movie that is set to release later this spring. There is a lot of buzz about the upcoming film, and Lechner is currently on a 6 campus tour to discuss the movie and what went into animating the scenes. Earlier today Lechner gave a talk to students at Eastern Michigan University in Roosevelt Hall, and a mixture of design and technology students showed up to hear about Zootopia. 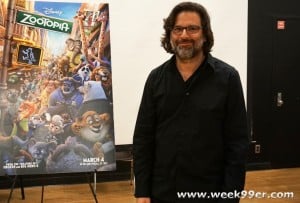 Zootopia is a world where animals developed as the main mammals instead of humans. Each different type of animal needs its own environment, and Zootopia was built to accommodate. Each different section of Zootopia is built to house the animals and the climates they need within animal-made modern micro-climates. The city includes dessert areas, rain forests and even a snowy tundra. When designing the areas of the city, the animators at Disney consulted weather experts at NASA to find out what would happen if you placed a snowy tundra on the opposite side of a desert. While in reality this would cause a bit of an issue – in Zootopia anything can happen.

The characters in Zootopia are modern day mammals, living in a modern world with technology and conveniences. But the different species of animals have different stereotypes associated with them, and all tend to live within their climates and do jobs that fit the stereotypes. That is until a little rabbit Judy Hopps becomes a police officer and has a bright outlook on life – You can be anything in Zootopia! While this is the theme the character believes, it’s something that animators considered while designing the characters, their vehicles and even the world that ended up being Zootopia. 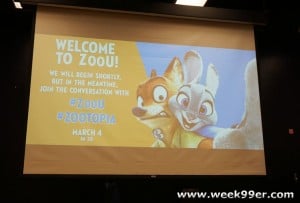 Overall, Zootopia had around 300 people work to bring the film to life. That includes concept artists, 3D animators, experts on animals and the weather, as well the story tellers. To create the movie, it isn’t as simple as writing a story and animating it. Instead the story helps inform the artwork, and artwork helps change the story some. In the beginning stages, the artists worked on creating buildings and environments for each of the different animals. “To design the home of a bunny, I got in the mind of a bunny” Lechner said. This included homes that look like rabbit holes, and concept art that included a drawing of a bunny home 200 rabbits, and what it’d take to feed them. 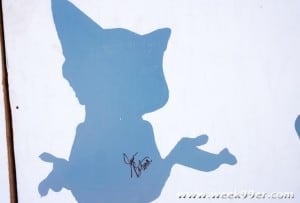 Animation over the years has changed from hand drawn cells to computer drawn artwork. But all animation starts in the same place – with drawing. Lechner says that the drawings are scanned in, and rendered (or colored) using Photoshop. The two-dimensional artwork is given to animators who take them and model the masses in Hyperion so they can get get an overall idea of what the world would feel like. This is when Lechner steps in and help direct the artists on what the third dimension of the space would look like. The massing of the spaces will then get materials and textures applied, but not just a flat map to create the appearance of a material but the actual dimensioned materials. With the world complete, Zootopia just needed weather conditions and lighting applied. To create the world of Zootopia special software was used to create the massing of buildings as well as the mapping of the city grid and spaces.

The world of Zootopia is complex and full of details. Lechner promises there are some Easter Eggs hidden throughout for fans to enjoy, and that the movie was made with parents in mind. His talk with the students and us afterwards was inspiring, and full of great perspectives of what it takes for designers and artist who want to get into animation.

Check out the Trailer for Zootopia, and catch it in theaters everywhere March 4th!