When you think of Aladdin, one of the stand out characters is always Genie. The larger than life, lovable, heart of gold, super power who helps Aladdin win the heart of Jasmine and beat Jafar. And while we have enjoyed the movie for over twenty years, we don’t often think about what goes into animating Genie and the film in general. 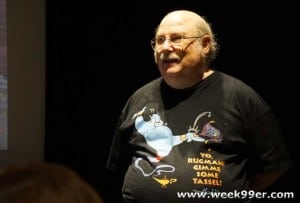 On a recent visit to Disney Animation Studio, I was able to hear first hand from Eric Goldberg, the head animator of the Genie and hear a little more about the process and what went into it. From the color schemes of characters, to the influence on the Genie, and even what working with Robin Williams was like – Eric entertained our group, and even brought us to tears with his heartfelt stories and connection to the Genie and Robin Williams. 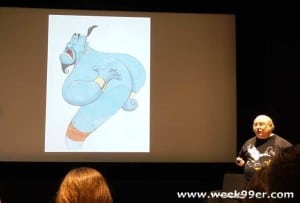 Aladdin is a movie I grew up watching, and even when I sit down to watch it today I can sing every song and recite every line. But I never knew that the movie had a color theme set before it went to animation. All of the good characters including Genie, Aladdin, Jasmine, and Abu all wear (or are) in the blue color families and cool colors. While all of the bad guys, including Jafar and Iago, the guardsmen and more red or black. It may not seem like something important to the story line, but the colors are a simple color cue to the audience on who is good and who is bad, or who can and cannot be trusted. 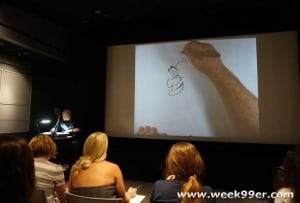 The Genie’s original design and idea was influenced by the drawings by Al Hirshfeld, including sinuous lines and S curves. There isn’t a straight line on Genie, and he is a continuously flowing line that can easily morph into any shape you want. To demonstrate the soft curves, and how the Genie comes to life on a page, Eric Goldberg gave us a drawing lesson on how to bring the Genie to life. In just under a couple minutes, we each had our own drawings of the Genie on our paper, and while none were perfect, you could see our influence as well as Eric’s in the drawing. 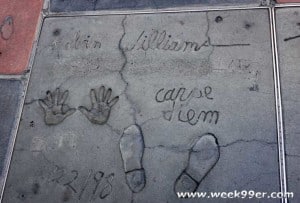 Genie is one of the most loved and memorable Disney characters so far. In our home he’s a favorite, and that in partially because of the character but also because he was voiced by Robin Williams. While the original Genie was drawn with him in mind, it was the combination of his comedy and talent that helped Eric Goldberg and his team make the Genie we know and love today. While recording for the part of Genie, there are days worth of recordings that weren’t used in the final film. As a tribute to Robin Williams, Goldberg and his team created a new animated track of some of the extras that will only be on the Aladdin Diamond Edition. The combination of the talent of Williams and Goldberg bring the Genie to life and make him one of the absolute favorites in our home.