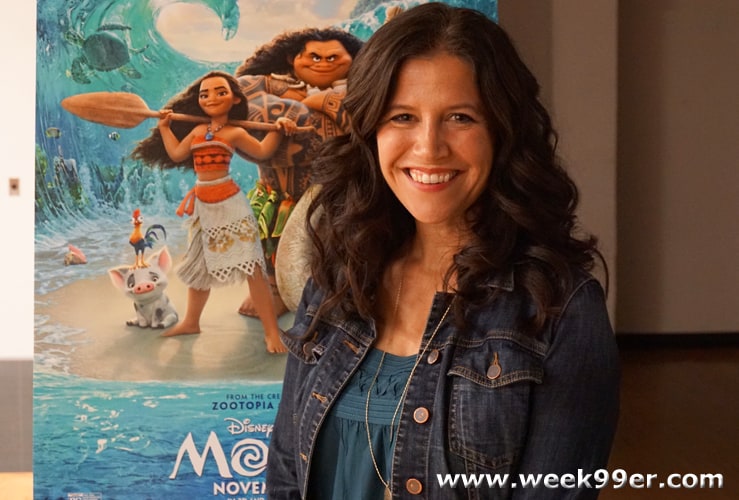 Next week, Moana will be opening in theaters everywhere. The movie invites viewers to Oceania, and the Polynesian islands. Creating the movie took years of research, experts from throughout the area and tribe leaders. Director Ron Clements recalls “An elder on the island of Mo‘orea asked of us something so simple and so revealing: ‘For years, we have been swallowed by your culture,’ he said. ‘This one time, can you be swallowed by ours?’” The movie allows viewers to be immersed in the culture via music, beautiful animation and different dances.

With the premier of the movie coming soon, Lead Animator Amy Smeed toured local design schools to sit down and talk with students about the movie and her part of it. Her tour allowed sneak peeks of clips of the film, as well as one on one interviews after her talk was done. Amy was kind enough to sit down with me to discuss the upcoming film and her part in bringing it to life.

Was the challenge the animation part of the movie (especially the water) or coordinating a team of around 90 animators?

I think we had a lot of challenges on this film, early on. Getting the anatomy correct, especially with Maui. With most of our characters there’s a shirt. At the beginning of pre-production we realized we had to do muscles and all that, since there’s nothing hiding any of that. So that was a huge challenge. There are a lot of different technical ways to make it happen. So we had art directed shapes. We also had difficulties since Maui is a shape shifter, he transforms into a hawk, a lizard and a bunch of other shapes. So we had to figure out how we were going to do that.

Ta’ka the lava monster was another challenge. It’s very effects heavy, and there’s lava dripping down her face and you still want to read her facial expressions.  Is there too much lava? Is there not enough lava? How is she going to move? Because she’s huge – if she moves too fast she’s weightless, but if she moves too slow she’s not really a threat.

Water was another huge challenge, we were going to animate the feeling of the water. If it’s moving very slowly, or quickly. So we tried to accomplish that by timing.

There has been some criticism on the portrayal of Maui by different members of the Polynesian cultures. What lead to his design and the way he was animated?

On different islands they do portray Maui very differently. One some islands he’s portrayed as a trickster, on others he’s known as this big Superman character. We wanted him to feel very powerful, because like the legend he’s pulling up an island. That was the reason for him being very muscular. So we tried to portray that. There have been comments about Maui’s size, but we see his size showing that he’s very powerful and larger than life.

Disney already has a movie in Hawaii with Lilo and Stitch, is there a reason why they went back to the Polynesian culture for this one?

Her island home is set more in the pacific islands. But I believe they were trying to stay closer to some of the other islands and not Hawaii.

According to the mythology (in the story) the people of the island don’t travel off of it over over 1000 years. Is this an actual part of the history of the area or is this a new mythology created for the movie?

It is Ron and John’s interpretation of what could have happened. The movie takes place 2000 years ago. The costume design and everything is as accurate as possible. There isn’t a lot of reference to work from. We tried to used materials from that time for our costume designs, and elements they would have had. Like a whale tooth holds her top together. Everything she wears would have been found on the island at the time.

How did your team approach bringing a character like Moana to life compared to previous characters?

When John and Ed came in, the project become much more collaborative. Our animators started to work with the different teams. Our team aspect started to get stronger with each picture. We have built a trust and the teamwork shows. There are a lot of people from Frozen.

I’m very lucky to have been in a leadership position. If you don’t have leaders being supportive of you it can be hard. I’ve had leaders that are very supportive. In our department there are probably 10 women, so it’s still very small. I love coming to speak at schools so I can show women it can be done and be inspirational. We don’t even get a lot of reals from women animators.

How closely did you work with Auliʻi Cravalho when animating?

She came into the studio during her breaks at school and spring break. When she came down to LA for Comic Con, and she was in the back of the bus doing math with her tutor. She was studying for PSATs. The moments with her and mothers are so touching.

Amy will be working on the team for Wreck It Ralph 2 and future Disney projects.