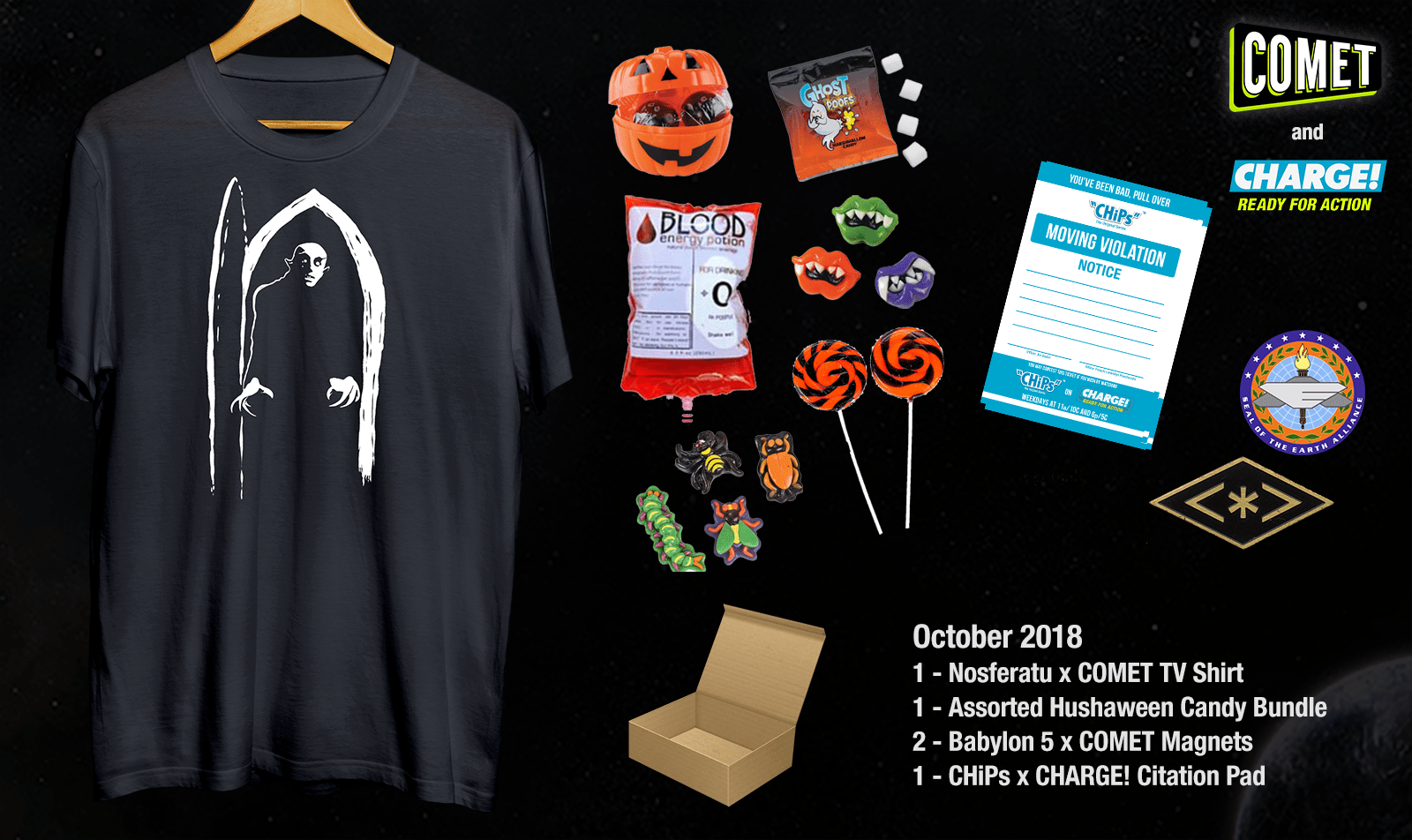 It is the creepiest time of year and we’ve partnered with Comet TV and Charge for a creepy giveaway package that you’re goin gto absolutely love! This Halloween tune in to COMET TV as they bring you the horror classics that will send shivers down your spine. Before Buffy, before Edward, and before a certain Count, there was Nosferatu. The classic Vampire film, which is followed by The Cabinet of Dr. Caligari and The original Phantom of the Opera.

Sure to send you to another world, COMET TV brings Space: 1999 and Babylon 5 back for classic spacey adventures! Everyday you can see Babylon 5 and Space: 1999 has back-to-back episodes on Saturday and Sunday evenings! Talk about out of this world!

So you can’t sleep? COMET TV has the solution with cult classic midnight movies airing Mon – Fri! You can pencil in Night of the Creeps, get sucked into Vampires on Bikini Beach and do your best to escape The House on Haunted Hill!

To usher in the spooky happenings of October we want to give your readers the chance to win he COMET TV and CHARGE! October Prize Pack!

Check out the shows you can expect to see on Comet TV and Charge! this month!

Airing on COMET in October

YOU DON’T NEED A SUBSCRIPTION TO WATCH THESE GREAT MOVIES…
THEY’RE AIRING FOR FREE ON COMET!

Babylon 5 (series)
New on COMET in October! Creator J. Michael Straczynski’s ambitious and complex futuristic space opera charts five years in the lives of those aboard the titular 5-mile-long space station, where personal drama plays out against a tense political backdrop of looming war between bitter enemies the Centauri and the Narn.

Hushaween (Halloween Marathon)
This Halloween tune in to COMET as they bring you the silent horror classics that will send shivers down your spine. Before Buffy, before Edward, and before a certain Count, there was Nosferatu. Catch the classic Vampire film, followed by The Cabinet of Dr. Caligari and The Phantom of the Opera.

The Cabinet of Dr. Caligari
at MIDNIGHT/11 C

MIDNIGHT MOVIES
So you can’t sleep? COMET TV has the solution with cult classic midnight movies airing Mon – Fri! You can pencil in Night of the Creeps, get sucked into Vampires on Bikini Beach and do your best to escape The House on Haunted Hill!

House of the Long Shadows (1984)
Four horror masters team up for chills, thrills and comedy! Join Vincent Price, Christopher Lee, Peter Cushing and John Carradine as they head to a seemingly deserted manor. One by one the visitors are picked off, and trapped in the giant estate! But who could be the killer?

Rage: Carrie 2 (1999)
You’ve heard of Carrie White, haven’t you? Well, don’t worry because she’s not here in the sequel to the classic, instead we get Rachel who inconceivably is Carrie White’s half sister. And… She’s also telekinetic! Say wha? It’s up to Sue Snell to try and save her from succumbing to Carrie White’s fate!
Wednesday, October 24 at MIDNIGHT/11 C

Airing on CHARGE! in October

Warrior (2011)
An estranged family finds redemption in the unlikeliest of places: the MMA ring. Tommy (Tom Hardy), an ex-Marine with a tragic past, returns home and enlists his father (Nick Nolte), a recovering alcoholic and former wrestling coach, to train him for “Sparta,” the biggest MMA tournament ever held. But when Tommy’s underdog brother, Brendan (Joel Edgerton), fights his way into the tournament, the two brothers must finally confront each other and the forces that pulled them apart.
Saturday, October 13 at 5/6 C

Want to win a prize package? Check out what’s inside:

One subscriber will win a Comet TV and CHARGE! October Prize Pack:

How Can You Win?
Enter to win with the form below. Let us know about favorite Monster flick or let us know what you’d like to see on COMET? Or Tell us your favorite sci-fi show! If you do not do this entry – you will not win! So make sure you leave a comment and then enter using the form below!

Each household is only eligible to win COMET TV + CHARGE! October Pack via blog reviews and giveaways. Only one entrant per mailing address per giveaway. If you have won the same prize on another blog, you will not be eligible to win it again. Winner is subject to eligibility verification.