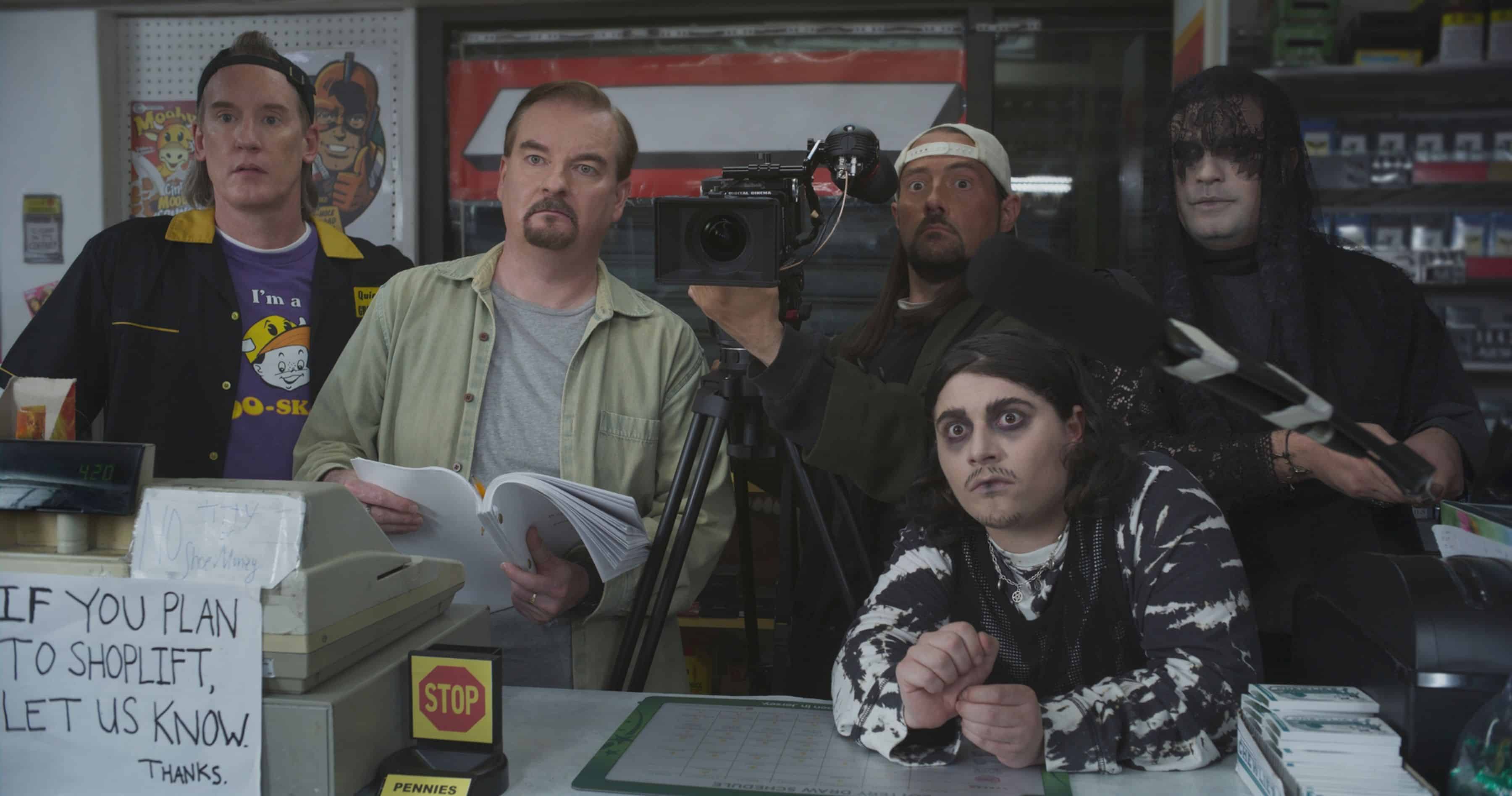 It’s time to head back to the Quick Stop one last time with Clerks III, the third, and potentially last in the fan-favorite series. Although the movie has been tossed around for years in pop culture reference as a possibility, and even on an episode of Big Bang Theory – this time, the Clerks are back in a film that is so focused on feeding the fans Easter Eggs, that they may even forgive that they’ve already seen this story before.

Clerks III takes fans back to The Quick Stop where Dante and Randal are back behind the register. The beginning of the film nods back to the first two with rooftop hockey and even reveals what happened after Clerks II (2006). The video shop that Randal used to run is now Jay and Silent Bob’s weed shop, and life has moved on all these years later. But after Randal has a heart attack, Dante is determined to help him make his dream of creating a movie about his life a reality.

This is where it gets a bit murky. The movie that Randal wants to make, is essentially Clerks, with a bit of Kevin Smith’s real-life story added into it like his 2021 documentary Clerk. The scenes that fans know from the first two Clerks movies play out as if they are part of a script, and you get a bit lost in the process of the filmmaking of a movie that we’ve all seen several times over.

Although Clerks III seems to be a bit of a rehash of the original Clerks movie, it is something that most movie franchises don’t ever do – simply exists for fans. The story is self-referential and leans back on the original source material hard, as well as Smith’s 2018 heart attack that changed the actor and director’s life. It meshes the two stories together and makes them into one for both Dante and Randal, all while referencing and creating the movie we already saw.

Fans of the Clerks franchise, as well of the other View Askew films will fall in love with Clerks III. From the moment that metal gate opens on The Quick Stop you’ll be inundated with Easter Eggs and references to the other films in the View Askew Universe. From Moobies, to Buddy Christ and even specific brands that only appear in that world. Some, of course, have been updated for current times, but at the heart of it, The Quick Stop is exactly how it was before.

Additionally, the majority of the original Clerks cast makes a return in Clerks III. Since the movie is about the movie being made, the original actors (albeit a bit older than when they first filmed) are cast in their original roles bringing the story and the actors full circle.

Fans of Kevin Smith, Clerks and the View Askew Universe will welcome Clerk III into the fold with open arms. It’s this weird balance of the same story, nostalgia with just a bit of new in it that will make fans happy to see it. Be sure to sit through the credits when you see the film. While there may not be a bonus scene, there is something absolutely worth waiting for as the credits roll.

WHERE: “Clerks III” will be playing in more than 700 theaters nationwide.  Tickets can be purchased online at www.FathomEvents.com or at participating theater box offices.

Following a massive heart attack, Randal enlists his friends and fellow clerks Dante, Elias, Jay, and Silent Bob to make a movie immortalizing his life at the convenience store that started it all.