When we were kids we were super excited for the toys inside our cereal boxes. I can still feel the cereal around my hands as I dug to the bottom of the box searching for the toy. Thankfully the toys included inside cereal boxes are not only a bit cooler than what we use to get, but are also packaged outside of the food that everyone is going to eat. We’ve been picking up a lot of cereal lately because the temperatures weren’t ones I’d want to cook in, and it can make a great filler meal. But a few weeks ago, we also noticed that some of our favorite cereals had special Skylanders Battlecast cards inside. So we’d get the cereal we wanted, even gluten free ones like Cheerios, and Goonie would get some cards to add to his new collection. Each box came with three cards, including one exclusive card that is only in the cereal boxes! 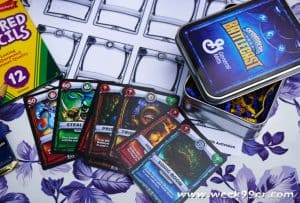 Last week, General Mills sent us a great package with some of their cereals inside, exclusive Skylanders Battlecast cards and even collector bowls and tins. With our own Portal Master at home, this kit couldn’t have gone over better if we planned it. Not only did he get more cards to play Battlecast with, but he was able to have some of his favorite cereals. 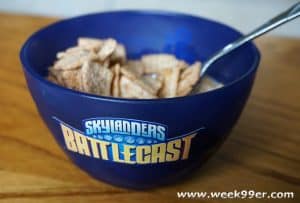 Skylanders Battlecast is a mix between a card game and an app to keep kids engaged. The characters have powers similar to the other Skylanders games and you can use the Skylanders Battlecast App (which is free to download) to bring them to life so they jump right off your screen. Play the characters you need to get through the different levels, and collect all of the cards you can in order to move onto the next level. 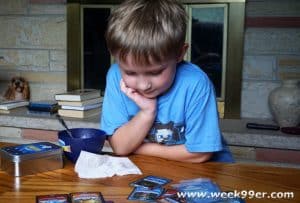 These special Skylanders Battlecast cards are available in specially marked boxes of Cinnamon Toast Crunch, Cookie Crisp, Golden Grahams, Honey Nut Cheeries and Reese’s Puffs nationwide through the end of September. You know – all of your kid’s favorite flavors! But the best part, it’s a game you’re going to love to play with your kids – it’s one to get them interacting and moving. Want to learn how to play? Check out the video below with an explanation on how to play Skylanders Battlecast with your kids and get them having playing this fun interactive game with their breakfast!

Just which cards are inside the specially marked boxes? Each one is different but every 3 pack will have one of the exclusive character cards -Sonic Boom, Trigger Happy, Prism Break and Hot Head. 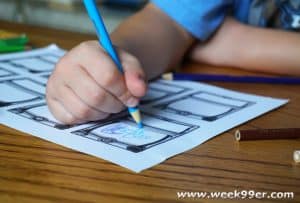 Once you get your cards, just scan them in your game and add them to your virtual deck. You can build your deck, trade characters and even battle others online with your different characters. It brings the fun of the Skylanders universe to your phone or tablet.

Besides having a delicious breakfast option, Goonie loves having his “cinnamon milk” as an after school snack. And to unwind, he took some time to create his own Skylanders Battlecast card, and added his favorite character Slam Bam to his deck.