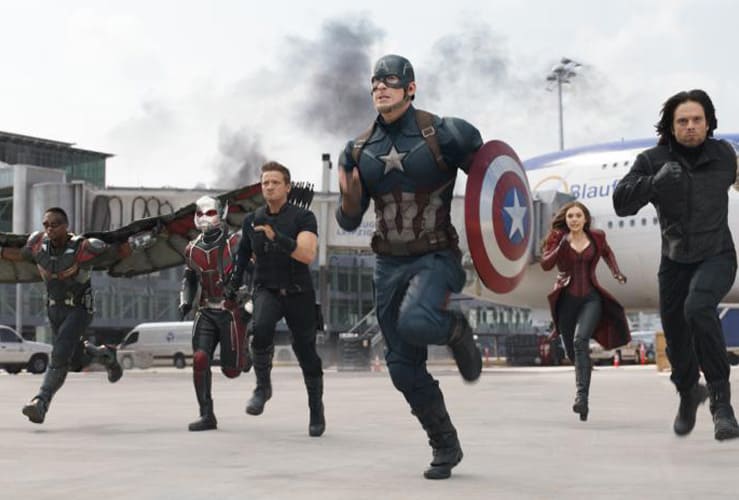 The movie cat has been released from the bag. Captain America: Civil War has been released in Europe a week before the release date in the US and there are several theaters that have early showings, so you will probably get spoilers more often than not. Depending on how much of the trailers and other advertising you are on top of, this review will have some minor spoilers.

First off, the civil war starts a division between the Avengers where one group wants United Nations oversight to help offset the collateral damages that have resulted in past efforts to save the world. The other camp feels they should stay independent. The independent side is lead by Captain America, containing Ant Man, Hawkeye, Falcon, the Winter Solider and the Scarlet Witch. Team Iron Man includes Black Widow, Black Panther, Vision, Spider-Man (more about this later), and War Machine.

The best part of the movie is the eventual throw down between the two factions, Avenger against Avenger, almost. Some new additions to the teams were a little oddly put together.

The main conflict between the two sides quickly falls apart, but not really. The main story has a villain, conflict between friends, controlling governments, a lack of Ms Potts, changing sides and two post scenes (one just after the “end” and one after the credits). You will have to watch the film (or read the wikipedia article) to see how it all plays out.

Black Panther has his separate agenda, but puts it aside to fight with Stark. It would have been more believable if he was on his own mission from the start, but there was enough going on that they needed to keep the two sides defined. The character seems more placed for later spin-off movies (Nov 3rd, 2017) than essential to the story line.

Spider-man was a good addition, but he was just starting out. And don’t even get me started on Marisa Tomei as Aunt May. Bad Tony, don’t hit on the new recruits family. The addition of yet another web slinger in the post-Maguire and post-Garfield era seems like they can never get the right actor. Hopefully Holland will be around for several movies yet to come. He already has the chatty part of the arachnid down. I will be cautiously optimistic of his new movies.

The reintroduction of Ant Man was a little off in the beginning, but he makes a pretty good showing in the major clash of the movie. Definitely true to his character.

Another thing I found a little odd is that everyone seems to know the secret identity of the masked members. This almost defeats the need for a mask, except in Panther’s case.  This new addition to the Marvel cinemascape will be added to my personal collection, but there are parts where it is lacking when compared to the first two Captain films. The tensions from the new dichotomy will make for interesting spin off movies as well as the next Avengers film.

Can’t wait to see Captain America: Civil War? Check out these fun facts about the film below as well as a great new featurette about the women in the film!

Jason often referred to as “the boyfriend” in posts and assists on several product reviews every month. He’s tech savvy, extremely picky and loves video games. He’s a self proclaimed dork and loves to travel. Jason not only assists on reviews but finds great content for Week99er readers all the time. He even suggests great recipes to try and helps perfect many of the recipes. Jason has starred in our Unboxing Videos and loves tech as well as photography. He is also our non-gluten free contributor. Jason also blogs at Wanderlustandreality.com and has his own photography business.

Latest posts by Jason (see all)