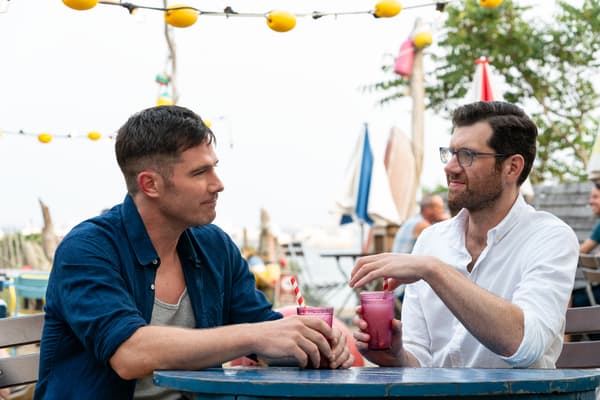 It’s hard to find a movie with a gay love story that isn’t written from a straight perspective. Through the years, there have been a rare few movies that weren’t just the gay friend used as a spot filler, or their unrequited love as a plot point. But thankfully, movies are not only starting to focus on that demographic of viewers but also on their real-life experiences. And Bros is one of the rare exceptions to that rule.

Written and produced by Billy Eichner, Bros follows an emotionally unavailable gay 40-something man, as he falls in love for the first time. The movie is filled with laughs, iconic LGBTQ+ actors and of course, several stereotypes played to make the audience laugh. But it is devoid of the traditional trope of a straight actor playing a gay person who is secretly in love with their straight best friend only to be heartbroken when their affection is not returned.

While Bros may not be the movie for everyone, it is definitely a spectrum-positive film. Not only is almost every facet of the sexual spectrum represented, but they are given equal space. It shows the acceptance as well as sometimes in fighting that happens within the LGBTQ+ community, but the need for the groups to work together. it also shows the acceptance and learning that still needs to happen within the community as well from straight allies.

Full of laughs, jokes, and of course a lot of moments that will pull your heartstrings – Bros is simply a quirky and fun love story. While it pokes fun at itself a bit, the movie shows that love stories don’t belong to one orientation or another, and while they may be different in some dynamics – love is still love. Bros hits theaters this Friday, and will take you on an emotional journey full of laughs.

From the ferocious comic mind of Billy Eichner (Billy on the Street, 2019’s The Lion King, Difficult People, Impeachment: American Crime Story) and the hitmaking brilliance of filmmakers Nicholas Stoller (the Neighbors films, Forgetting Sarah Marshall) and Judd Apatow (The King of Staten Island, Trainwreck, The Big Sick), comes Bros, a smart, swoony and heartfelt comedy about finding sex, love and romance amidst the madness.

Starring Billy Eichner, the first openly gay man to co-write and star in his own major studio film, Bros is directed by Nicholas Stoller from his screenplay with Eichner. The film is produced by Judd Apatow, Stoller and Joshua Church (co-producer Trainwreck, Step Brothers). The film is executive produced by Eichner.