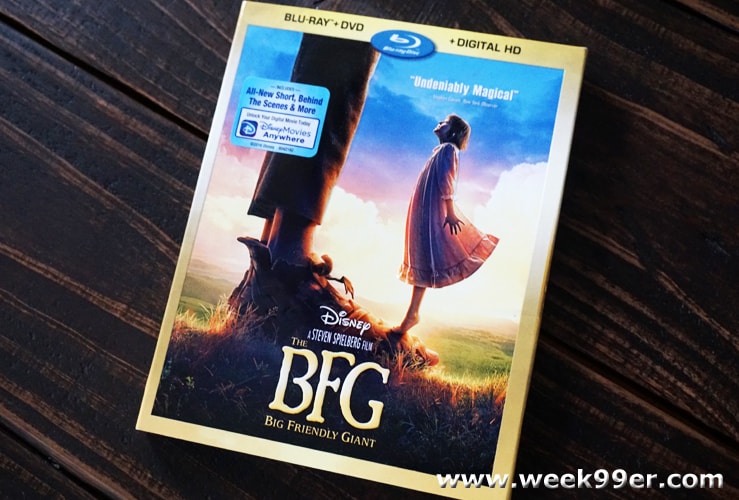 Audiences everywhere fell in love with The BFG when the movie came out earlier this year, and I have to say we were no different. I did go into the movie already loving the story, so it wasn’t a shock for me that I loved seeing it come to life. But now The BFG is ready to come home and everyone will love the magical adventure and the fizzbanging good time!

I’ve always been a fan of Roald Dahl books, but The BFG won my heart as a young reader. The story is nothing short of magical. The story begins with young Sophie, an orphan in London who accidentally sees a giant late one night. He snatches her and takes her to Giant Country. While it’s a scary situation, Sophie thankfully was taken by The BFG, or the Big Friendly Giant. The movie introduces you to not so friendly giants, and takes you to the land where dreams live and all the way to Buckingham Palace. 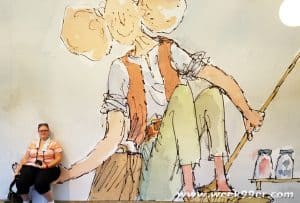 Like all Roald Dahl books, the story is written to be slightly ridiculous. The children are always the hero and there seems to be an evil they have to overcome. The BFG fits this perfectly, and the story quickly wins over children. With ridiculous moments, fart jokes and a giant who doesn’t quite use words right. The story was originally suppose to be in the 1980’s and the movie keeps true to that, with elements like visiting Buckingham Palace. The story catches the attention of the Royal Trust as well, and if you ever visit Buckingham Palace, be sure to get your picture with The BFG! It was a highlight for me on our trip there. The movie and the story will capture your heart and will be one you want to watch over and over again.

The BFG is available on Blu-Ray, DVD and Digital HD everywhere and has a total run time of 118 minutes and is rated PG.

This month, the world celebrates the 100th anniversary of the birth of Roald Dahl, beloved children’s author of family favorites like “Charlie and the Chocolate Factory,” “James and the Giant Peach,” “Matilda” and Dahl’s personal favorite, “The BFG,” as well as World Dream Day, an annual event honoring “the dreamer, visionary and innovator in all of us.” It seems a fitting time to announce the in-home release of “The BFG,” Disney’s fantasy adventure film directed by Steven Spielberg, on Nov. 29 on Digital HD, Blu-ray™, Disney Movies Anywhere, DVD and On-Demand.

As dreamers around the globe gear up for Sunday’s World Dream Day, an annual holiday honoring “the dreamer, visionary and innovator in all of us,” it seems a fitting time to announce the in-home release of “The BFG,” Disney’s fantasy adventure film directed by Steven Spielberg and featuring a dream-collecting Big Friendly Giant. This heartwarming tale for the whole family arrives home for the holidays on Nov. 29 on Digital HD, Blu-ray™, Disney Movies Anywhere, DVD and On-Demand.

“The BFG” unites the talents of three of the world’s greatest storytellers – Roald Dahl, Walt Disney and Steven Spielberg – to bring to life the classic tale of a courageous little girl named Sophie (newcomer Ruby Barnhill) and a gentle and charming Big Friendly Giant (Oscar®-winner Mark Rylance) who introduces her to the wonders and perils of Giant Country. Spielberg employs a new, hybrid style of filmmaking blending live-action and performance-capture techniques, resulting in genuine, heartfelt performances and super-photorealistic animation.

Families and fans will be swept away by this spectacular adventure and delight in extensive bonus features, including a behind-the-scenes look at the making of “The BFG” hosted by Ruby Barnhill and featuring Steven Spielberg; a charming, all-new short; a fun and whimsical tutorial on the Big Friendly Giant’s unique language of Gobblefunk; a touching tribute to screenwriter Melissa Mathison (“E.T. the Extraterrestrial,” “The Black Stallion”); and more.

Spielberg’s directorial debut with The Walt Disney Studios was a labor of love, as he’s been a fan of Dahl’s for years. In fact, he read “The BFG” to his own children when they were younger. According to Spielberg, “It’s a story about friendship; it’s a story about loyalty and protecting your friends; and it’s a story that shows that even a little girl can help a big giant solve his biggest problems.” “The BFG” is a Golden Phizzwizard* come true for Spielberg, Dahl fans and audiences around the world.

Take the BFG & Me Quiz today: