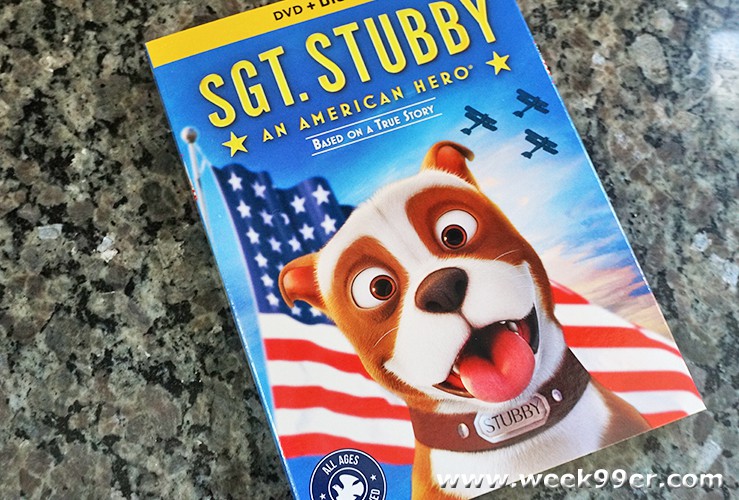 Rarely do we find a movie about Veterans that we can share with our kids. That is until Sgt. Stubby came out, and now the movie is available everywhere on DVD. Based on an incredible true story, the heartwarming, family-friendly animated adventure SGT. STUBBY: AN AMERICAN HERO deploys on Blu-ray, DVD, Digital and On Demand December 11, 2018 from Paramount Home Media Distribution. Featuring an all-star voice cast, SGT. STUBBY: AN AMERICAN HERO has been lauded by critics and received the Dove Foundation’s “All Ages” Seal of Approval and Parents’ Choice Gold Award, making it an ideal holiday gift that the whole family can enjoy.

SGT. STUBBY: AN AMERICAN HERO depicts the little-known true story of the unbreakable bond between a young soldier and a stray dog on the brink of America’s entry into World War I. For his valorous feats, Stubby is still recognized today as the first dog promoted to the rank of Sergeant in the U.S. Army and the most decorated dog in American history. He is also widely considered the forerunner to the U.S. Army’s working dog program. The delightful animated film shows the world that the greatest heroes can come from the unlikeliest places. SGT. STUBBY: AN AMERICAN HERO was directed by award-winning documentarian Richard Lanni and features the voices of Logan Lerman (Percy Jackson & The Olympians) and Helena Bonham Carter (Harry Potter films).

The SGT. STUBBY: AN AMERICAN HERO Blu-ray and DVD both include a digital copy along with a behind-the-scenes featurette with cast interviews, a documentary short about the real Sgt. Stubby, never-before-seen production art and a historic photo gallery of the early 20th century world as depicted in the film.

With an original score by Patrick Doyle (Brave) and animation services by Technicolor that combine CGI and vintage- inspired 2D sequences, SGT. STUBBY: AN AMERICAN HERO was produced and distributed by Fun Academy Motion Pictures. Screenwriters are Richard Lanni and Mike Stokey II (Band of Brothers), with editing by Mark Solomon (Chicken Run).

About SGT. STUBBY: AN AMERICAN HERO: With the “War to End all Wars” looming, the life of Army “doughboy” Robert Conroy (Lerman) is forever changed when a little stray dog with a stubby tail wanders into a training camp in New Haven, Conn. Conroy gives his new friend a meal, a name, a family and the chance to embark on an adventure that would define a century.

About the Real-Life Stubby:

Before he was a hero, Stubby was homeless, unwanted, unwashed and unloved, scrounging for scraps on the streets until he was taken in by Private First Class Robert Conroy of the 102nd Infantry Regiment, 26th “Yankee” Division.

In France, Stubby saw frontline action in four offensives and 17 battles. He found wounded soldiers, saved an entire company by alerting the men to don gas masks and even caught a German spy. After the recapture of Château-Thierry, the women of the town made him an embroidered jacket that would serve as Stubby’s uniform and display his numerous awards throughout the rest of his career.