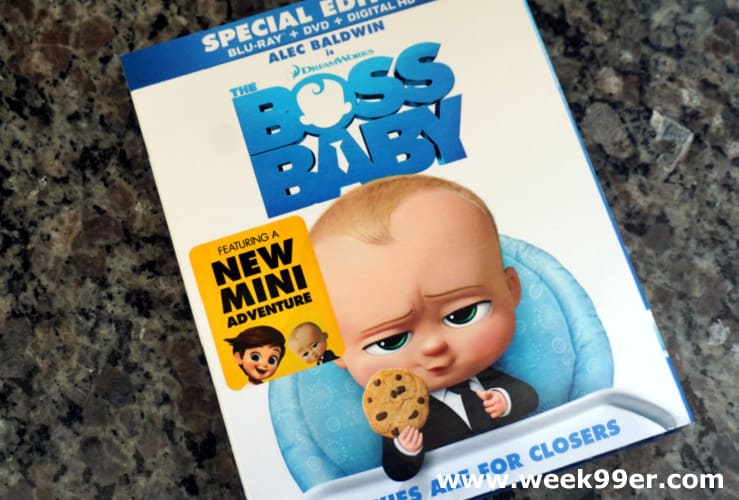 Adding a new baby to the family is always hard, especially when he comes with a bossy attitude. In DreamWorks latest animated movie, The Boss Baby the new baby in the family isn’t there to just to be cute, but to rule the family. Finding out how the new family works is only part of the problem when the Boss Baby is revealed to be on a secret mission all along.

The Boss Baby like all other DreamWorks Animation movies is animated wonderfully and is a movie that both kids and parents can enjoy. From relate-able moments to ones that will make you laugh The Boss Baby will be a movie your kids will want to watch over and over again. However, from an adult’s perspective – it may be geared just a little bit too much towards kids. That being said, the movie is cute and definitely kid friendly.

With a total run time of 97 minutes, The Boss Baby is rated PG. The Blu-Ray an DVD Combo package comes with a fun new animated short as well. Order You Copy of The Boss Baby Today

About The Boss Baby:

DreamWorks Animation invites you to meet a most unusual baby when  THE BOSS BABY, the “wildly funny” adventure comedy of the year arrives on Digital HD July 4 and on Blu-ray and DVD on July 25. Seven-year-old Tim Templeton suddenly finds his share of parental love plummeting when his new baby brother (Alec Baldwin) arrives — wearing a suit and toting a briefcase — and makes it clear to everyone that he’s in charge. But when Tim discovers that Boss Baby is on a secret mission, he reluctantly agrees to team up with his pint sized sibling for an epic adventure that might just change the world!

From the director of the hugely successful Madagascar franchise, Tom McGrath, comes a hilarious adventure-comedy about family and belonging. In addition to Alec Baldwin, THE BOSS BABY features the voice talents of a stellar cast including Steve Buscemi, Jimmy Kimmel, Lisa Kudrow, Miles Bakshi and Tobey Maguire.

THE BOSS BABY SPECIAL EDITION comes loaded with bonus features including the NEW Mini Adventure, a 3-minute action-packed journey through time featuring Boss Baby and Tim. Join the fun as Boss Baby and Tim battle pirates, travel through outer space, swim deep into the sea, and go toe-to-toe with some ferocious dinosaurs! Additional bonus materials include featurettes like “Cookies are for Closers: Inside BabyCorp,”   Deleted Scenes and more!

THE BOSS BABY Blu-ray™, Blu-ray 3D, 4K Ultra HD, DVD and Digital HD each include more than 30 minutes of extras: