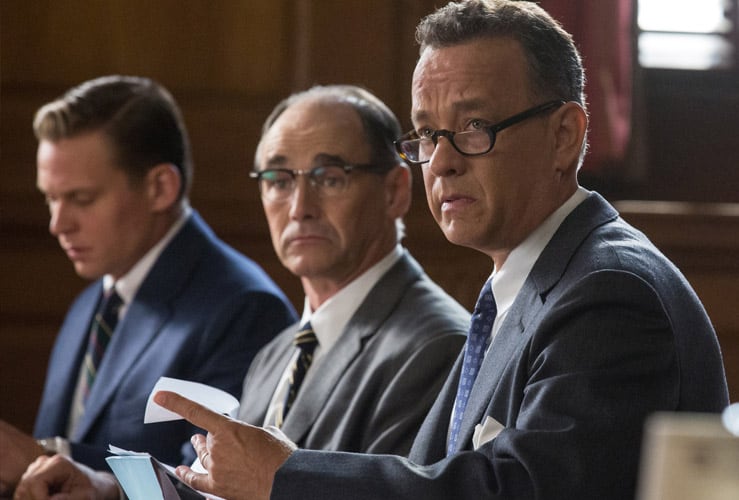 Growing up with a history buff in the house I knew a little about a Cold War before we went to the screen of Bridge of Spies, but I’ll be honest – not a ton. I knew what most people in my age group do, it’s the time period where we feared the Communist threat, that children were prepared in school for bombs being dropped on them, and almost everyone in Hollywood was called up and questioned for their beliefs. But I had never heard of James Donovan, Rudolph Abel or Francis Gary Powers.

Bridge of Spies is based on the real life events that happened in the midst of the Cold War, and how one lawyer makes his mark. James Donovan (played by Tom Hanks) is an insurance attorney tasked with representing Rudolph Abel, a Russian spy who is captured by the government. Although he really isn’t given a choice to represent Abel, Donovan puts his career and family in jeopardy to do his job. Despite not being able to get the fair trial he believes Abel deserves for just doing his job, Donovan is able to convince the courts to keep Abel alive in case they ever need to make an exchange for one of their men. Not very long after, that day that Abel is needed as an insurance policy comes and Donovan has to cross enemy lines to bargain for once again.

We really enjoyed Bridge of Spies, and despite it having some slow parts the movie didn’t seem to be the 2 hours and 20 minutes it’s actually slated at. The movie will be a big hit for any history buffs, as well as anyone who loves legal movies. The characters are believable and each part of the story leads towards the next. It’s a great depiction of actual events, and I’d gladly recommend it to anyone who loves historical movies.