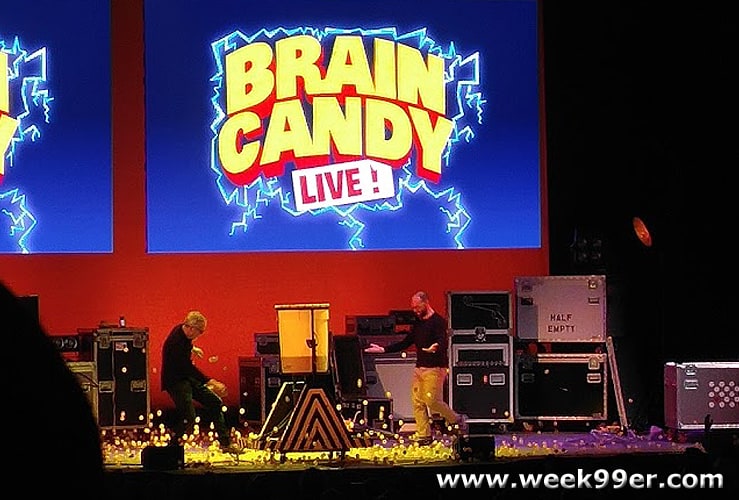 Being dorky and nerdy are actually cool right now – science is cool and we’re in this weird time in history that we are celebrating the intellectuals and learning. It’s about time isn’t it? So when we heard that Brain Candy Live was coming to the Fox Theatre in Detroit we wanted to go and check it out and see the show in person. Brain Candy Live is the collaboration of Adam Savage (Tested and Mythbusters) and YouTube Star Michael Stevens. In theaters all over the nation they’re bringing science to life, and making it a visually stimulating show to engage the audience. 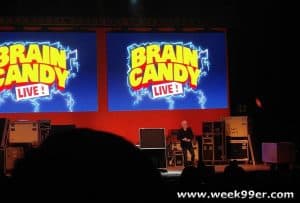 We made our outing to Brain Candy Live a family event, but were slightly worried that it may be too advanced for Goonie (who is almost 8). While some of the topics were a bit complex, they did keep the explanations simple for younger viewers. There were times we felt the show may have been a bit too simple for older audience and more geared to my nephew’s age group rather than the majority audience that came to see two stars they’re use to seeing tackle harder topics for adults. 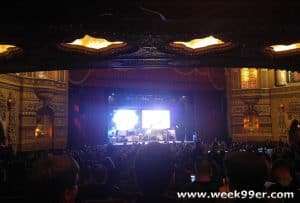 Our seats for the show were floor level, but almost to the back wall (and below the balcony). This however did not make it so we could not see what was happening – and we actually found that the screens during the show often over compensated for the space they were in and were too bright. When items needed to be zoomed in on stage, they decided to use a phone cam to do the video which did create a bit of a grainy and not a great resolution for projection. 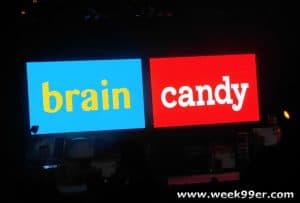 Overall the show was fun, and there were some parts that were extremely neat to see. But it seemed like they scaled back the show for much younger viewers. We do appreciate a family friendly night and nothing we had to worry about in the material, but had hoped for a bit more than a few tricks and a lot of black outs with dancing. The show lasts just over an hour, and is worth the money. What was totally worth seeing, was my nephew’s face light up watching the science come to life in front of him and raising his hand from the back of a packed theater hoping to be picked as a volunteer. The show is geared more towards a younger audience but still fun for the family.

For more information about Brain Candy Live and their tour schedule check out their website.

2 thoughts on “Brain Candy Live – Is it for Kids or Adults? #Braincandylive”