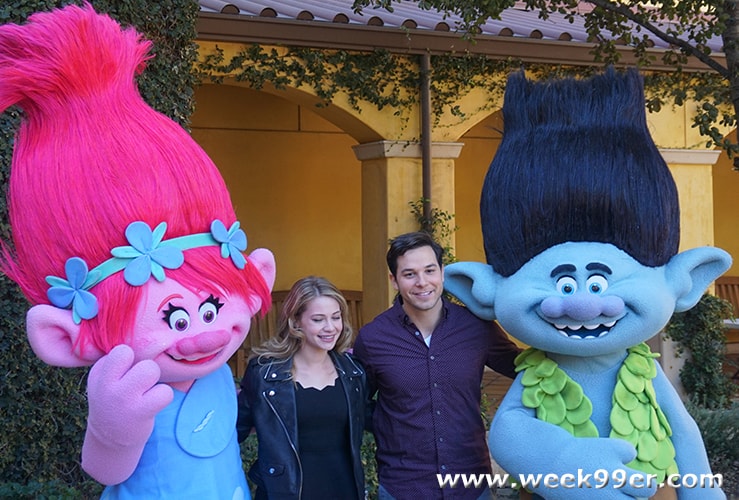 With the music and story inside Trolls, Dream DreamWorks Trolls: The Beat Goes On picks up where the movie left viewers, and enters into new areas of Troll Village for everyone to explore. With brand new stories, songs and characters, it explores the new role of Poppy as queen and her friends.

The movie we all love is in 3D, but the new Netflix series in 2D animation. This gave animators the flexibility to deliver episodes quickly but still met the bright and colorful world of Trolls. It still offers the warmth and color that the feature film did for viewers. The songs from the show are incorporated in the story, and help express the emotions of the characters.

Even though the show has the characters we know, they are voiced by new actors. Skyler Astin (Pitch Perfect) takes on the role of Branch and Amanda Leighton (The Fosters) joined the cast as Queen Poppy. We were able to talk to them about the new show and their new roles.

Can you describe the characters you are playing? 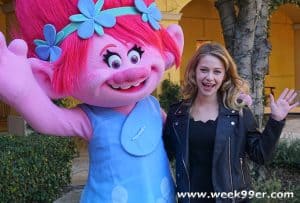 Leighton: I play Queen Poppy. She’s trying to find her new place in the world and with her friends.

Astin: I’m Branch – he’s sort of the curmudgeon of the group. He always is learning something new and I appreciate that.  And through his tough exterior of being gruff and no play I think he has a heart of gold.

Amanda – Playing Queen was there anything you had to do to prepare for the role?

It’s funny because when I first auditioned for the role, Trolls wasn’t out yet. There were no commercials or anything.  For voice over auditions you’re presented with a little picture of a character. And I got a little bit of the voice of Anna for the film. So I was like “I have a voice, I have a picture and I have a script” it was sort of filling in the blanks. It was trusting yourself and trying to stay true to the who that person is.

Skylar – living in a bunker is a bit of a different character. Where did you pull from to bring that to life?

I asked what type of voice they wanted and they said mine. And that’s what I did. I think accessing that dry, witty, part of myself at time, my voice and personality maybe. After the first few sessions we actually went back because we were getting a little too dry or under-cutty. Then he found his own passion in certain things. We’ve come to such a great place now and we’ve hit a groove.

What is special about this series? 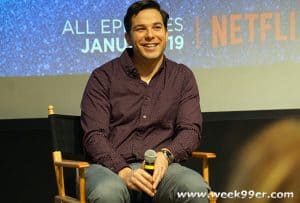 Skylar: Every episode is so dynamic. In one episode I give a Braveheart speech. It’s being given the opportunity to do do these simple and sweet stories with Poppy then these scenes where I’m imagining I’m going to war. It’s such a well crafted show and we always feel like we’re in good hands. We get to come in at a very unique part of the process where things are pretty ironed out and we get to hopefully bring it to a slightly new level and bring some life into it. And that is what I take great pride in and being able to bring to the project.

Amanda, when you first started the movie wasn’t out yet. Now that it is out does it bring a new persepective to the project? 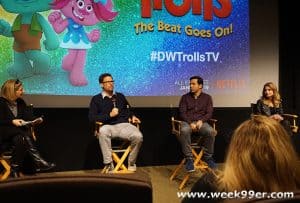 It’s kind of fun because when we got to watch the film everything clicked. This is who she is – she’s this optimistic person who loves her friends and would do anything for them. It’s so cute to see when kids light up for this role. This role is so bright and colorful and fantastic. Each episode we do has a different lesson to it. It’s fun. I’m at home reading the script and laughing to myself at the jokes. It has a really good message.

DreamWorks Trolls: The Beat Goes On! Season 1 is now on Netflix! Check out the official trailer and more about the show below: