When we sit down to watch movies and television shows we often forget about the amount of work that goes into making the show. It’s not that we don’t know about the amount of people involved, but watching animated features separates us from reality. And making 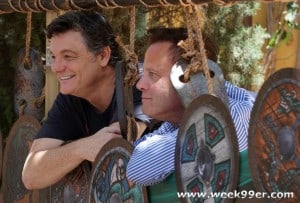 On my recent trip to DreamWorks Animations Studio, we had the pleasure to sit down with the talent behind DreamWorks Dragons: Race to the Edge as well as experience small bits of Berk and elements of the movie.

First we sat down with show runners Art Brown and Douglas Sloan:

Can you tell us where the new shows take place in terms of the franchise?

These episodes fall in between the first and the second movie, and about a year and a half before the second movie begins. The kids in the movie are maybe 21, and here they’re about 19. It will give them a good year or so, to have all of their adventures and we’ll pick them up in the second movie right where this series ends.

What if you haven’t seen the first two movies, would you be able to figure out what the series is about?

Sure, there’s three sort of audience we’ve catered to. There’s the fans who have been with the franchise since the beginning, and they’ll see things in the episode they’ll recognize. There’s the adults who enjoy the show and will notice the themes as a learning experience for the kids. And for the new audiences who are coming up, people who come in, in the first two episodes. We introduce new dragons and villains as well.

What’s great between the first and second movie – so much has happened when you step into the second movie. How is this different?

When the show starts, Berk is not as developed as the second movie. It doesn’t have all the tunnels and buildings and all that. Hiccup is still trying to figure out what he wants to do. Where the second movie picks up, he’s already at that place. We are able to tell the genesis of that, and also able to tell you how they got their dragons, and how he got his flight suit. How Hiccups relationship with Astrid develops.

Netflix’s Magic word is  “propulsive serialization” and your show takes advantage of that!

It’s a serialized show, and stand alone episodes. They’re usually about a new dragon and it doesn’t involve the rest of the story line. We usually have those about every 4th episode or so.

What we found while doing the show, the audience loves new dragons. They love these characters.”

You are able to fill in the gaps of what happened, fill in the character story lines, and even give them their own club house!

Yah it’s really cool. In the third episode, using the Dragon’s Eye, they find a suitable location. And they end up building their own huts and places.

They have an argument about what The Dragons Edge should look like, and Hiccup solves it by saying “make your house however you want it to be, you make it” Astrid makes this fortress, Fishlegs has a zen garden, Snotlaut has a big S on his, and has a crank so he can always make his higher.

There is a lot more to come with Dragons: Race to the Edge for our favorite Characters and more, but not all of the secrets were deluged in our interview. As we continued our tour 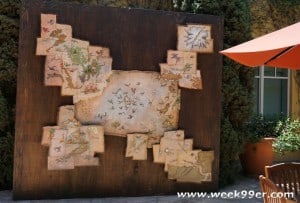 around DreamWorks, we were able to talk to different team members and find out what happened behind the scenes.

Over freshly made ice cream, created by Super Cool Creamery, we were also able to sit down with the writers of the show who come up with the concepts for all of the new episodes and help fill in those gaps between the old series and the new.

Why is it a year and a half before the second movie? At first when it started playing and it showed characters who don’t make it through the second movie, I was a little confused. What is the reason for doing the time jump? Just to close the gaps or was there another reason?

Well, it was to tell some of the origin stories. To tell how they get the Dragon Blade and the Flight Suit. They thought there’d be some good stories about where that stuff came from.

And when we’re doing doing an expanded universe, it’s easier to tell the in-betweens, rather than new stories. The stories in the movies are fully contained, with a beginning, middle and end. The stories in between are a little easier to explore and the ensemble cast, new dragons and to set up what you will see in the sequel.

And since there’s a third movie, we’re not stepping on things that you might see in the third movie.

And you wont do spoilers of the movies like the other TV shows do?

The movie actually spoiled our show!

Also with characters like Hiccup, who is such a great hero – our show provides a way to show us how he grows up. We’ve been able to do that to this point. You can see where he is in the first episode, what he’s looking for and where he wants to go, the point he’s at in the second movie.

Is there a potential for the stories to continue after the second movie?

Not in this series… But if there is a demand..

Start a letter writing campaign, bang on some doors.

It’s an interesting challenge for us to write stories that can exist between the two movies, that don’t overstep. So we’re always trying to make sure we don’t mess up continuity.

When you write for Netflix, where you don’t have commercials, do you still have to write the typical arc with three part structure? You don’t have to have cliffhangers for the commercial break – how is it different writing the story?

The honest answer is its all the same, because there are markets that Netflix doesn’t have and it may air there. The model is so weird now, someone may buy it later and put it back on broadcast.

In television, you try to leave in the middle of a scene for a cliffhanger. We try to leave at the end of the scene for our cliffhangers. We still have the tree act structure, but we come back into it on a fresh scene.

It is kind of weird to think that it’s going to be right back in a split second.

How long did it take you to write it? One Episode?

It varies. The first episode took a long time. Once an outline is broken, we have a week to write the first draft. We get notes back and have another week to come up with the second draft?

Do you even know what they’re writing about for the third movie?

The show runners are more in contact with the movie side but it’s above our pay grade.

So there’s no chance you could seed something in from the movie?

Chances are they’d see something in our show and pull it out and bring it back.

Are they going to explain a little bit more about the timeline? A lot of kids may not realize the time jump?

A lot of the ancillary press will speak to that. The lead in blurb on Netflix should help with that as well. Hiccup says it at the beginning, and the visual cues are there.

Behind the scenes of every show there are a lot of moving parts, and it’s a very rare occasion that you get to sit down and talk to some of the people involved. The show runners and writers of DreamWorks Dragons not only create magical stories in the land of Berk that we’ve all come to love, but help us learn the origins of some of our favorite characters and their history. It was an amazing experience speaking with all of the creative talent behind the new show.

You can experience the first thirteen episodes of DreamWorks Dragons: Race to the Edge on Netlfix now!

1 thought on “Behind the Magic of DreamWorks Dragons: Race to the Edge #DreamworksDragons”