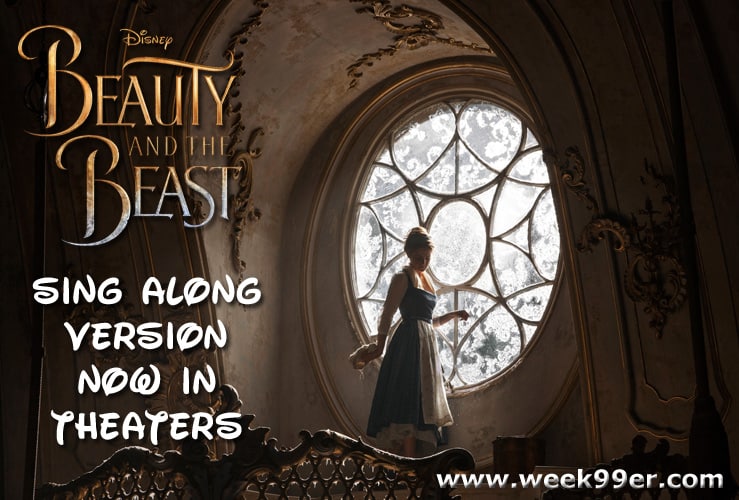 We grew up with Beauty and the Beast, and I have to admit – I may have sang along with some of the songs in the new live action version. But not every song in the new live action Beauty in the Beast was in the cartoon we grew up with. Knowing fans can’t resist singing along with the new movie, Disney has released a special sing along version of the movie.

The “Beauty and the Beast Sing-Along” will feature on-screen lyrics to such beloved songs as “Belle,” “Be Our Guest,” “Gaston” and “Beauty and the Beast” written by eight-time Oscar®-winning composer Alan Menken and two-time Oscar-winning lyricist Howard Ashman and new songs “How Does a Moment Last Forever” and “Evermore” written by Menken and veteran lyricist and three time Oscar winner Tim Rice.

Disney’s live-action adaptation BEAUTY AND THE BEAST, in which the story and characters audiences know and love come to spectacular life, has grossed more than $875 million worldwide to date, making it the highest grossing movie musical of all time. The film opened in U.S. theaters on March 17, 2017 immediately setting a box office record for the largest March opening ever for a PG-rated film (over $170 million). “Beauty and the Beast’s” domestic box office total currently stands at $393 million. Overseas the film has grossed more than $482 million as of today.

The film’s soundtrack, which includes songs from the score performed by Ariana Grande and John Legend, Celine Dion and Josh Groban, has been equally as well received, entering the Billboard 200 chart at No. 3 and Billboard’s Soundtrack and Children’s charts at No. 1. The Beauty and the Beast Soundtrack is available Online and wherever music is sold and streamed.

Tags: beauty and the beast, disney, movie, sing along