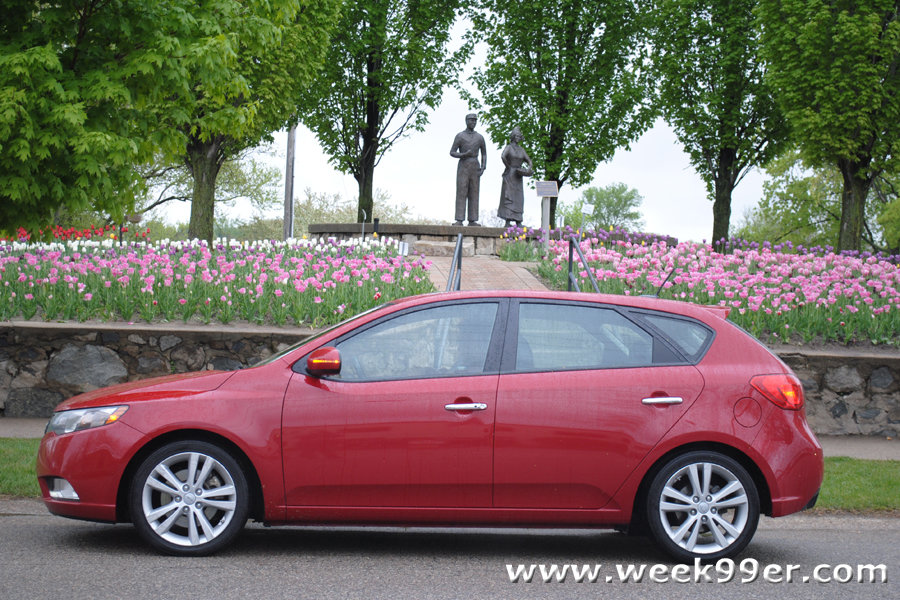 It’s starting to heat up out there, and instantly our minds start to wander and dream about hitting the road. I’ve been called a road warrior more than once in my life – if the road takes me there, I’ll be on it. I just need a set of four good wheels and a nice ride to get me there.

Our summer driving started early this year, we had a family member graduating from college on the other side of the state and decided to make a weekend out of it. While I’ve lived all over Michigan, Jason hasn’t, so we took some time to explore our own state and take in the sites. 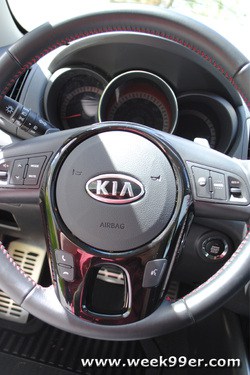 For our trip Kia let me use one of their 2013 Fortes. It is a 5 door sedan (hatch back) that while it looks small on the outside has a lot of space and pizzazz inside.

Inside the Forte I was greeted with features I’ve started to become use to in a Kia – hands free commands, gpa, satellite radio and eco-boost mode for the fuel. Like other Kia models I’ve driven in the past it also had a manual option. That being said the Forte is a completely automatic vehicle, but if you need just a little more “oomph” you can slip the drive shaft over and go up or down a gear. The Forte was the first model I’ve reviewed that had “fun paddles” behind the steering wheel that made changing gears just that much easier. Thankfully on this trip we didn’t really hit major hills or conditions that would require us to use that option. 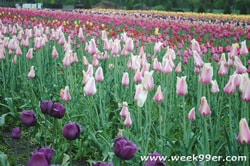 Like their other vehicles, the Forte came with keyless entry. If this isn’t something you’ve used in the past you’re missing out. You can simply walk up to the car with the key fob in your pocket and get in without hitting buttons. This made loading and unloading luggage so much easier. But a couple times if I wasn’t walking as fast as Jason, he was a little disappointed when he forgot he couldn’t get in the car until I got a little closer – it may have been on purpose a couple times too!  This is a great safety feature if you’re traveling alone, since only the door you’re near will unlock unless you tell it to unlock the others!

The first stop on our weekend adventure was to the Holland Tulip festival. We were greeted by bright colored flowers, windmills, wooden shoes and sadly frigid rain. Despite being from that side of the state, and a large part Dutch – I had actually never been to the festival before!

Even with the bad weather, Holland was a hopping place and I was happy to have a compact car like the Forte. The size of the car made it easy to get around town quickly and easily and fit the car into smaller parking places than my large sedan would.

As we continued our trip through the west side of Michigan, unfortunately the weather did not seem to want to improve much. Yes, despite the beautiful pictures below we even experienced snow an hour before that was taken! Just proves that Michigan weather can be an experience of its own! 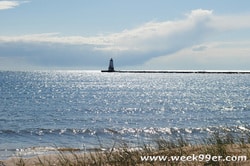 One of our concerns when I first booked the Forte was the size of the vehicle. It is a hatch back and a smaller car would it be good for a long trip in the car? Most of you don’t know this, but I’m almost 6′ tall and Jason, well he’s 6′-6″. Before we agreed to take the Forte out on the road we checked out the measurements on the leg room. I didn’t want to spend the whole weekend in the car with someone being cramped and upset.

The legroom for the driver and the passenger both measure the same as larger sedans. I am happy to report that we didn’t have any leg cramps over the weekend or anyone complaining about the size of the car. We even had an open back seat that kids could have easily fit in if we wanted to bring any with us! 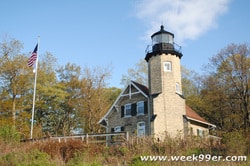 We took the Forte from Holland to Grand Rapids, to Big Rapids for the graduation ceremony. We made a stop in Ludington (image above) to feel the breeze from Lake Michigan on our faces. Unfortunately it was a bit frigid still since the snow had just stopped. We continued our path down the lake shore and found our way to Whitehall to visit another lighthouse – there are still several we can visit throughout the state! While we got to enjoy a beautiful view while we were there, the sky was about to open back up and the frigid rain began to fall again. 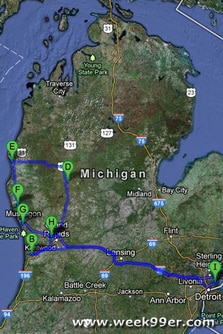 The trip took us down to Muskegon and back to Grand Rapids before we headed home after our long weekend. In just a couple days we took the Forte from Detroit to the other side of the state and back, totaling over 700 miles! While we did have a couple issues with the GPS conflicting with our fly-by-the-seat plans the Forte worked perfectly!

While the Forte isn’t a huge car it will be great for small families to take on weekend trips and beyond. It has all of the goodies that you can expect from a larger vehicle and space enough to move around. I dare to venture to say that you could easily fit in a family of four with a car seat in the back easily! 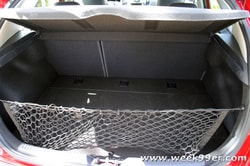 One final thing about the Forte, due to it’s size there isn’t a huge trunk to fill with stuff. Under the floor of the trunk space there are cubbies that can store your road side tools and safety kits. The back easily fit two suit cases and a couple other bags with out any problem. After we loaded our luggage we closed the trunk and the vanity shield hid it all from view so we didn’t have to worry about it being seen as we went out to site see.

As the toured our own state the Forte was a great car for the trip! Check one out for your next road trip and get out and explore your own state! 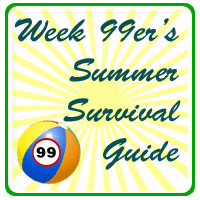