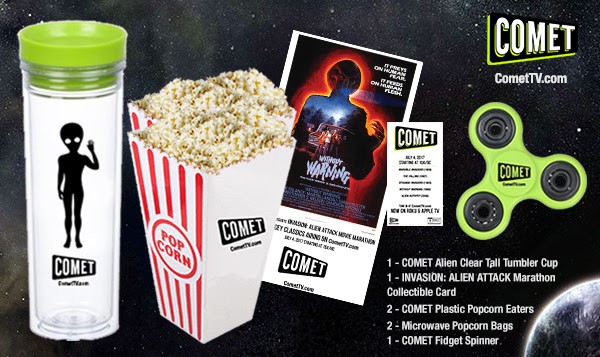 Are there Aliens among us? That really depends on who you ask and what they believe. 70 years ago there was a crash in Roswell, New Mexico and it has captivated the imagination and suspicions of people all these years later. Was it an alien ship that crashed? Or was it really just some airplane junk that fell from the sky? Some day we may find out the truth but until then we’re still believing and celebrating 70 years with Comet TV and an Alien Attack Marathon!

Want to win a Alien Attack Movie Marathon Pack? There’s all kinds of awesomeness in this set!

How Can You Win?
Enter to win with the form below. What is your favorite Sci-Fi show? or How would you survive an alien invasion? If you do not do this entry – you will not win! So make sure you leave a comment and then enter using the form below!

Entry-Form
Each household is only eligible to win Alien Attack Prize Pack via blog reviews and giveaways. Only one entrant per mailing address per giveaway. If you have won the same prize on another blog, you will not be eligible to win it again. Winner is subject to eligibility verification.