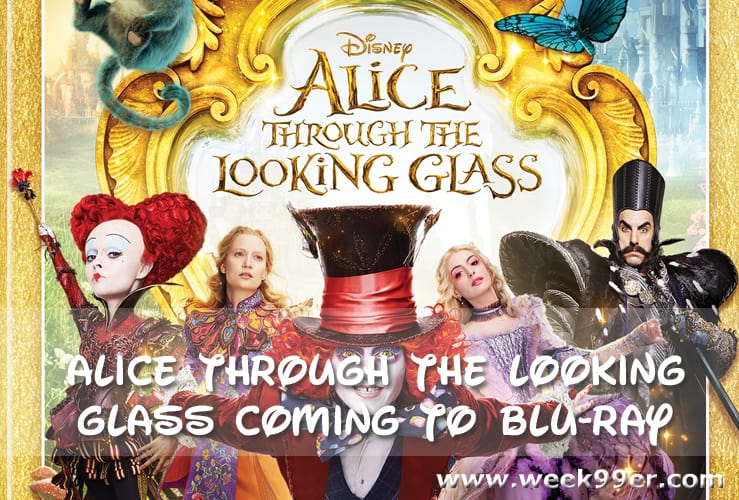 It’s time to return to Underland with Alice, the Mad Hatter and all of the crew. The second movie in the Alice in Wonderland series is coming home on October 18th on Blu-Ray, DVD and Digital HD. The action packed movie will lead you through the story of the Hatter as well as the Red Queen, and takes you on an adventure through time as Alice tries to save her friend. The movie is a bit of a more darker twist than the first movie, but isn’t too scary for children. If you didn’t get a chance to catch it in theaters you can read our full review here. We can’t wait to add this one to our collection!

About the Alice Through the Looking Glass Blu-Ray, DVD and Digital HD Release:

Lewis Carroll’s “Alice’s Adventures in Wonderland” forever changed the landscape of children’s literature; Disney’s animated “Alice in Wonderland” embraced this fantasy world filled with peculiar characters; and Tim Burton directed a visually-stunning, live-action film that mesmerized audiences worldwide. On Oct. 18, 2016, the enchanting and beloved franchise that has captivated generations of adventurers continues when Disney’s “Alice Through the Looking Glass” arrives home on Digital HD, Blu-ray™, Disney Movies Anywhere, DVD and On-Demand.
In “Alice Through the Looking Glass,” the all-star cast from the 2010 blockbuster is back with Johnny Depp as the Mad Hatter who’s desperately searching for his family; Anne Hathaway as Mirana, the kind, mild-mannered White Queen; Helena Bonham Carter as Iracebeth, the short-tempered, big-headed Red Queen; and Mia Wasikowska as Alice, the heroine at the heart of the story. Sacha Baron Cohen joins the ensemble as Time, a magical being that is part human, part clock, and the late Alan Rickman—to whom the film is dedicated—is the voice of Absolem, the blue Monarch butterfly who metamorphosed from the blue caterpillar “Alice in Wonderland.”
Fascinating, in-depth bonus features invite in-home audiences to further explore the whimsical world of Underland. Three-time Oscar®-winning costume designer Colleen Atwood reveals the creative process behind the film’s ornate costuming; P!nk provides on-set access during production of her “Just Like Fire” music video; Sacha Baron Cohen showcases his quirky new character, Time; and Director James Bobin offers insightful audio commentary and introduces five, never-before-seen deleted scenes.

Check out a glimpse of a behind the scene clip of the Just Like Fire music video with P!nk: