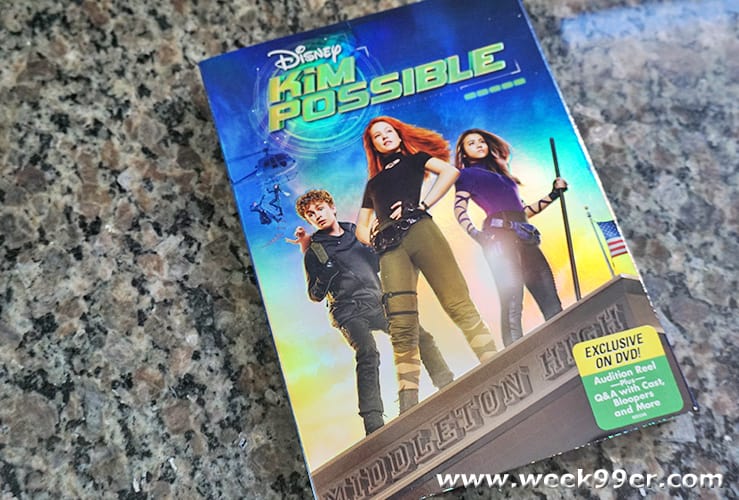 Highschool isn’t the only adventure in store for Kim Possible and Ron Stoppable! The animated show we loved as kids is back and now the team is trying to save the world between classes and homework. With new characters, some super fans and of course a lot of bad guys this movie is a fun new take on the cartoon we loved.

The movie has a similar feel as the animated show did, and puts a new spin on the battles our favorite characters face. What is actually harder – dealing with saving the world or finding their place in high school? A battle that kids may be able to relate to themselves.

Loaded with bonus content and a family friendly show you don’t have to worry about your kids watching. Fans of the original cartoon wont be disappointed in the film, and you will be happy with how they handled the characters. With relatable characters for young and older viewers, it will quickly become one of your favorites to watch with the family.

The Kim Possible Movie has a total runtime of 86 minutes without the bonus feature and is rated TV-G. You can get your copy of Kim Possible on DVD everywhere today!

Looking for something sinister to quench your thirst? Whip up a KIM POSSIBLE treat in the form of Dr. Drakken’s Milkshake! Grab the recipe right here

Based on the global hit animated series, the live-action “Kim Possible” Disney Channel Original Movie follows everyday teen hero Kim Possible and best friend and sidekick Ron Stoppable as they embark on their freshman year of high school, all while saving the world from evil villains. By their side every step of the way is teen tech-genius Wade and new friend Athena, who also happens to be a Kim Possible super fan and is eager to join Team Possible. While Kim and Ron have always been one step ahead of their opponents, navigating the social hierarchy of high school is more challenging than the action-hero ever imagined. With Drakken and Shego lurking in the wings, Kim must rely on her family and friends more than ever. Now it’s up to Team Possible—Kim, Ron, tech-genius Wade, new friend Athena and Rufus, a naked mole-rat that Ron meets along the way—to stop these super villains.