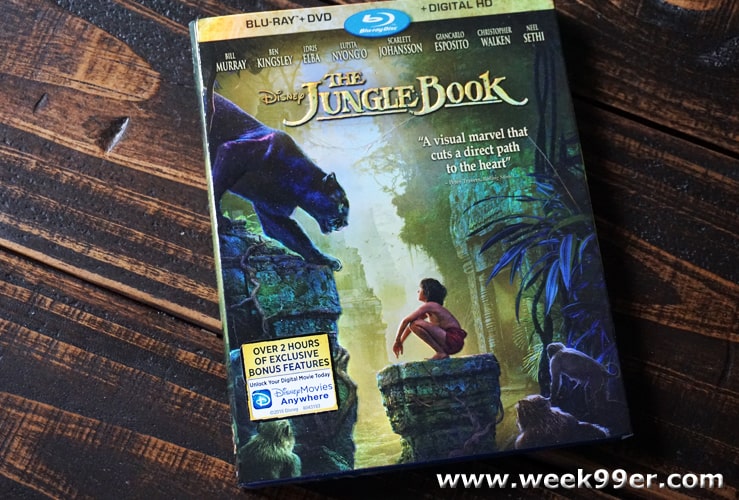 Our home theater collection is filled with a lot of classic movies including most (but not all) of the Disney films we grew up with, so we’re absolutely loving when they are recreated and released by Disney. We fell in love with the new live action version of The Jungle Book that came out this spring, and I knew instantly it would be a movie we’d add to our collection. This week The Jungle Book was released on Digital HD, and next week you can get it on Blu-Ray and DVD. We were sent a copy of The Jungle Book on the special Blu-Ray + DVD + Digital HD collection, and there are so many reasons to get it! If you didn’t have time to see the movie in theaters, or you’re on the fence about seeing it – here are some of the reasons to check it out:

Bonus Feature: “They Made it Possible”:

About the Blu-Ray and HD Digital Release of The Jungle Book:

Audiences were mesmerized by Disney’s live-action epic adventure “The Jungle Book,” which has earned more than $949 million at the global box office to date.  Critically acclaimed, Jon Favreau’s stunning live-action reimagining of Walt Disney’s animated classic, will be available early on Digital HD and Disney Movies Anywhere on August 23, and on Blu-ray Combo Pack, DVD and On-Demand on August 30.

Venture behind the scenes with in-depth bonus features that reveal the innovative filmmaking technology used to create the richly immersive jungle world and characters; Follow the journey of the film’s only on-screen actor, charismatic newcomer Neel Sethi (Mowgli); Delve into a candid and humorous scene-by-scene audio commentary with director Jon Favreau and meet the all-star voice cast who help bring the film’s colorful characters to life, as well as the musicians who accent the adventure with a majestic music score.

Audiences will also have the opportunity to experience the movie again at select IMAX locations for a limited time only from August 26th through September 1st.