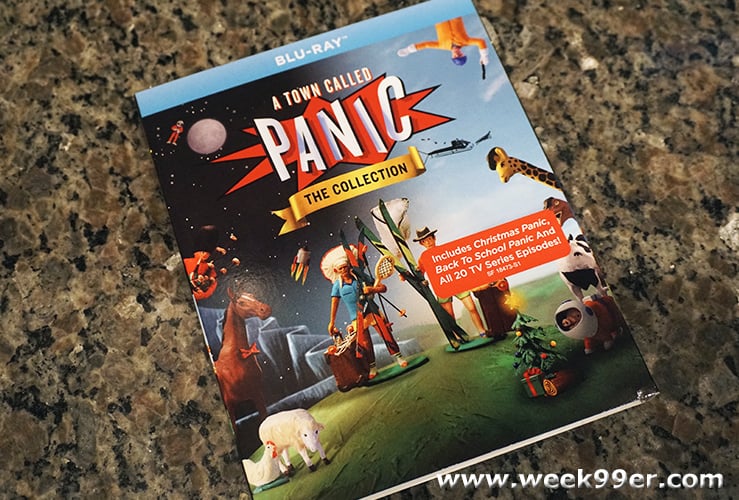 Somewhere in between childhood and becoming teenagers kids shows get a little lost. Some shows are too young for kids, and others are too old. But there are a few that fit that mold perfectly in between. A Town Called Panic is just one of those shows, a show following three plastic toys on adventures that are hilarious and kids over 9 will love.

Shout Factory and GKids sent us a copy of A Town Called Panic: The Collection – the first collection of not only all 20 of the episodes in the series, a short film The Sound of Grey, Christmas Panic and Back to School Panic. A total of 152 minutes of episodes and shorts your kids will be laughing along to, and you will be as well. While it’s for kids, the claymation style animation is a change from what kids are use to and meticulously artwork that any animation fan will appreciate.

A Town Called Panic: The Collection will be available everywhere on Blu-Ray and DVD on December 19th, you can pre-order your copy now! Or read below to enter to win a copy!

About A Town Called Panic: The Collection:

Cowboy and Indian are always up to some harebrained scheme, with Horse left to clean up the mess. In Christmas Panic, their out-of-control antics lead Horse to call Santa and cancel the presents. But the boys figure they can still save Christmas… if they break into their neighbor’s house to steal his yule log! In Back to School Panic, a class quiz promises a fantastic prize, but only Pig knows the answer. Cowboy and Indian use a special shrinking potion to sneak into Pig’s brain, where they discover a bacon-packed world that is more than they bargained for.

A Town Called Panic: The Collection received a 50+ theater theatrical release in fall 2016 as part of Arthouse Theater Day, a day of unique programming at independent cinemas nationwide. Christmas Panic! and Back to School Panic! won audience awards at the New York Int’l Children’s Film Festival, the largest festival for kids and teens in North America, the Jury Award at Annecy Film Festival, as well as additional prizes at numerous festivals around the globe.

Shout Factory is giving three of our readers a copy of A Town Called Panic The Collection! Read how you can win a copy below!

How Can You Win?
Enter to win with the form below. What is your kids favorite show? or Who would you share this with? If you do not do this entry – you will not win! So make sure you leave a comment and then enter using the form below!