Skip to content
Earlier this spring I met the great people from Hamilton Beach on my trip to Chicago. They gave us an open invitation to visit their test kitchen in Virginia if we were ever in the area. So last week on my second trip to Washington DC in two months, we set up a quick trip down to visit their headquarters and kitchen – I mean seriously, what home cook wouldn’t jump at that opportunity? 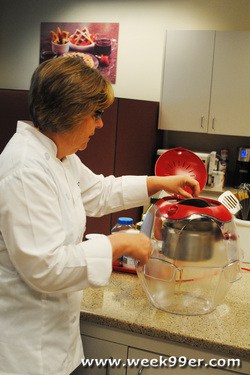 A little over an hour south of the DC area you will find the Hamilton Beach Headquarters. In an unassuming office building, and through a winding maze of cubicles you will find not only testing labs, but the official Hamilton Beach test kitchen. Inside wasn’t exactly what I expected, but it’s where all Hamilton Beach, Proctor Silex, Melitta and other brands products go through their final test and see if they fit the standards of the company as well as the consumer.

Our tour of the kitchen was led by Pat and Laurie, the two cooks who spend their day playing with the new appliances. But it’s not all fun and games. Not only are appliances put through vigorous cooking tests, that bring the engineers knocking for food, but they are washed, put through extensive scientific testing as well. All of this not only allows Hamilton Beach to stand by their claims to the end user, but helps them trouble shoot problems later, and even test their legal claims for all of their product standards.

In house, not only are all products tested for their standards but all legal claims are substantiated. Hamilton Beach test all of their products in different stages in different departments so the can eliminate as many problems along the way. The same procedure is put on their user manuals, to make sure they not only cover all of the legal points, but are useful for the end user. The final step for all products is the test kitchen. 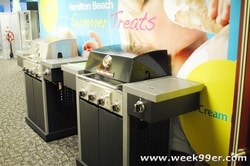 While most people would expect the test kitchen to be a large and almost more corporate or commercial kitchen setting – that isn’t the case for the Hamilton Beach test kitchen. Since the end user is a home cook, the Hamilton Beach test kitchen was designed similar to what the consumer would have. Home grade stoves, dishwashers, sinks and even utensils are what are used to perfect their dishes. And while their counter space is something that any home cook would drool over, it is quickly filled up with different appliances and food items as new recipes are developed and products tested. I appreciate that they work as a home cook would, and even have a section of their kitchen that is to ADA standards for home cooks with disabilities.

On our trip we were also able to see a few newer Hamilton Beach products that are coming to the market soon. From a Collapsible Ice Cream Maker (fall 2014), to a Home Theater Popcorn Popper that stores easily and has a large bowl for your delicious kernels (fall 2014) and even the Flex Brew that has an adjustable filter that fits fresh grounds or kcups (late 2014/2015)- there is a lot of fun new kitchen must haves just around the corner! It was a great treat seeing these new products and others that are now on my “to get” list (I’m looking at you Hamilton Beach Grill with built in smoker!)

Throughout Hamilton Beach’s Headquarters you can also see their wall of awards as well as a display of the items from their 104 year history. I’m excited to see what will be coming to the kitchen next, and it’s great to see where they came from!

1 thought on “A Look Inside the Hamilton Beach Test Kitchen – Where Ideas are Cooked Up!”