When the Little Caesars Arena was announced in Detroit, the development of the area met a little resistance. A lot of people couldn’t see what the space could offer the downtown area, but almost a year after it opened its door – thousands of sports fans, music lovers and diners have crossed thru the doors of the facility and have fallen in love with the LCA and everything it has to offer. 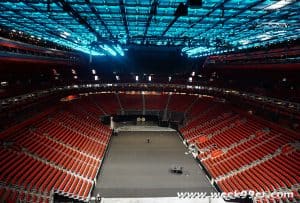 Originally part of The District, a 50 block area in Detroit being redeveloped to include shopping, entertainment, family friendly venues and more. Little Caesars Arena is not only now the home of the Red Wings, but the Pistons and host to concert series and other shows throughout the year. Not only does LCA offer a place for families to come and see some of the best shows and games in the area, it also makes Detroit one of the only cities to have all of their sports team within a few miles of each other playing in the downtown area. 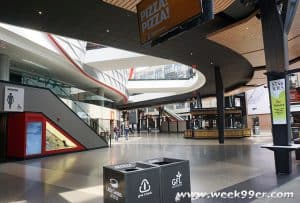 But there is so much more to LCA – from shopping, dining options right on site and even lounges where you can just hang out. The sweeping interior architecture opens up the hall way in between the stadium and the restaurants making it a walk-able space that people can meet and hang out as well. Every detail of the design was considered and shelving was even added to the support poles making them quick tables for enjoying snacks.

Look throughout the arena and you will find memorabilia from the Joe Louis Arena including the original box the Wings sat at every game, and statues throughout. Detroit memorabilia decorates the space and makes it feel a bit like tour of the towns history instead of just a sports venue. 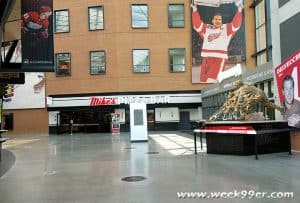 While you’re waiting for a game or concert to start, stop in for some pizza at Mike’s Pizza Bar, some Shwarma off the main concourse or even a beer at Kid Rock’s restaurant. If you want a real treat, get tickets to the Player’s Club – an exclusive restaurant that not only gets you seats almost on the ice, but the team walks through to get to the ice. A special night out or dinner with friends Little Caesars Arena has something for everyone! 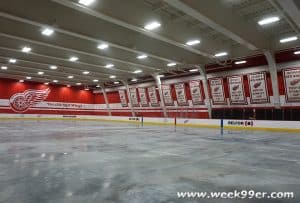 There is a hidden secret at LCA as well – a small ice rink that is actually located under the main plaza. This is a training rink for the Red Wings but also a place that kids are able to practice and play games in as well.