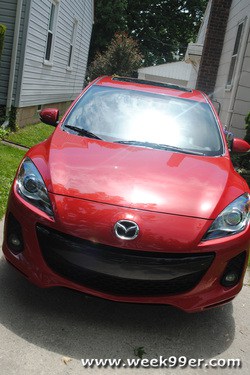 When a 2013 Mazda 3 was dropped off at my house my first thought was it was quite small for a sedan. Were we going to have problems fitting everything in the car that we needed? Would my boyfriend who is well over six feet tall be able to fit comfortably in the car? We had a week to find out, and plenty of items to stuff in the car!

So we started on our trip in a car that not only is quite stylish but looks like it’s smiling! We had a family barbecue to attend the day after the car arrived, and not only had to bring food, but other items we had picked up that needed to be delivered to family members. But even before all of that – I had to get use to the car and driving it. 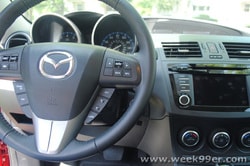 The interior of the Mazda 3 was sleek and clean. Inside not only did we have all of the controls on the steering wheel, but we were welcomed by a Tom tom navigation system and the SkyActiv technology.

SkyActiv Technology is exclusive to the Mazda brand. It is a streamlined engineered system between the engine and other systems to provide better fuel economy and longevity of the life of the vehicle overall. This includes a lighter chassis providing a better overall fuel economy. According to Mazda’s website SkyActiv Technology:

SKYACTIV TECHNOLOGY has been developed which is an umbrella name for a range of breakthrough, new-generation technologies that dramatically improve driving pleasure as well as outstanding environmental and safety performance. 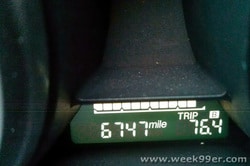 I’m not completely sure how it all works, but the mileage I was able to get in the car was fantastic!

The first day I had the Mazda 3 I did my normal errands around town, went to work and back and quickly noticed that hardly any gas had been used. My older car would have gone through at least a quarter tank at this point! I was excited to see just how far we could go with this. 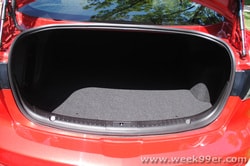 Since the Mazda 3 seemed small to me a first, I had to check out the trunk space. We’re on the go a lot a lately, so I need to make sure we had a lot of space. The trunk was large – but just how much would it hold?

Remember I said we had a family barbecue coming up? Besides food we had items we had picked up for my parents, my nephew, my cousin – enough that it created a large mound in the kitchen as I stacked it all up getting ready to go. I loaded the car before we took the hour and a half trip and we both got in and drove the hour and a half to my parents. 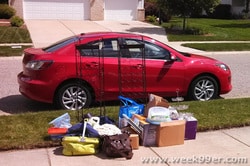 As we drove, my boyfriend and I chatted about everything in the car. I mentioned that everything fit including the wine racks. He quickly turned around and was shocked to see them in the mix.

Yes – not only did me and my tall boyfriend fit comfortably in the car, but we also fit in: 2 wine racks, 2 dozen cupcakes, a cupcake stand, 2 pairs of boots, a cooler full of mixed drinks, a cake, a camera bag, a book bag, party favors, snacks, 6 dozen cookies and much much more. 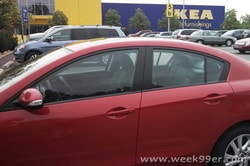 Knowing that we both could easily fit in the car, as well as a lot of goodies, that meant I could easily take a trip to Ikea before giving the car back. I filled the back of the car with storage totes and other items before I came home and unloaded them. It amazes me how much space is actually in the Mazda 3, since it is so small next to my car. 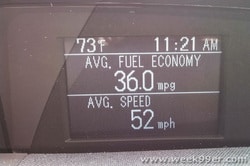 As I mentioned before I was impressed with the gas mileage I was able to get in the city – but it is suppose to get up to 40 mph on the highway, and I had a great opportunity to test that out.

The day after the family barbecue I had a business conference in Chicago, which meant a bit of a drive. Thankfully from Detroit to Chicago is a straight shot down I-94. I loaded the Mazda back up and hit the road.

The Mazda 3 not only keeps track of your current fuel economy but your average speed. And only trip which included highway and in city driving I was able to achieve 36 miles per gallon. That’s over 10 miles more per gallon my current car gets! 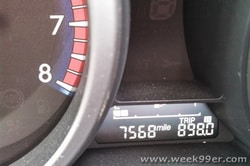 In my week with the Mazda 3 I put it through it’s paces, and tested its size and fuel economy. I’m impressed on how much umph this little car had and how versatile it was. It would be the perfect car for your day to day errands or for a small family and trips. In one week, I  almost took the car 900 miles and only had to fuel up one time! With the current cost of gas, the fuel economy is a huge value! This was my first experience with a Mazda, and I can understand the love for the Zoom Zoom!