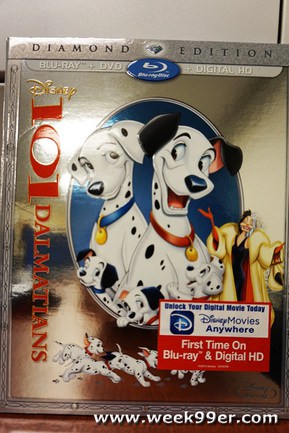 There are several different Disney classics we grew up watching, and one of the was 101 Dalmatians. Besides a great story with adorable puppies, it also has one of the baddest villains known to movie history. Cruella De Vil is often a favorite when you do a line of of the best bad guys as well!

For the first time ever Disney has released 101 Dalmatians from the vault and this time it makes its way onto Blu-Ray as well as on Digital HD on Disney Movies Anywhere. We were sent a copy of the 101 Dalmatians Diamond Edition to review and for me it was a fun trip back to when I was a kid, and watching the puppies go on am adventure to reunite with their family and get away from that evil Cruella De Vil!

The 101 Dalmatian Diamond Edition includes the Blu-Ray, DVD and Digital HD versions of the movie, it also has bonus features including:

The feature film has a total run time of 79 minutes and is available everywhere today!